I have taken to listening to screamingly loud music on my iPod while doing chores, which means I am constantly waiting to be murdered.

You can't hear anything with Beats smashed into your ears and some dude screaming about goatblood or whatever. There is always a freaky killer clown behind me or something, just know it.
Click here to see a bigger one if don't know how to work your internet machine.
What is with the comics? I have no idea.
at 6:26 PM 2 comments:

Email ThisBlogThis!Share to TwitterShare to FacebookShare to Pinterest
Labels: comic Celebs. They are most likely boring-ass regular people. Granted, they are beautiful-ass, regular people. When they aren't being their characters, they are pretty dull to me, just like other regular jerks. Beautiful...regular....beautiful...what was I saying...?
Nothing is a bigger boner killer for me than hearing a favorite actor/musician, who I may have concocted some sort of fake personality for in my ugly-person-brain, give props to God.
It shatters my fake fantasy love for them.
at 8:00 PM 11 comments:

Back in the day, I worked in a clothing store that sold coats. I would often mention that changing the buttons on a coat was a good way to make it look better.  The store where I worked would sell every coat with cheap tortoiseshell plastic buttons, and that made me barf. Nice coats ruined by ugly-ass buttons.

When I suggested that sewing on new buttons would transforma a coat, the customers would looked at me like changing the buttons on a coat was the most work any human had ever had to do. Its not a big deal! Sewing a button is something every man,woman and child should at least know how to do.


Lets do this.
Buy an "affordable coat"...Ok, boring/cheap/whatever coat. This one is a very normal one from H&M which I bought because I needed a "lady coat." See, cheap buttons. Horror.
Figure out how many buttons you need, buy 'em. I bought mine off of Etsy, by searching in the supplies category. They were extremely affordable. I had a hard time finding buttons I liked that were also the same size as the old crappy plastic buttons, so I gambled a bit and bought slightly smaller buttons. I knew I may have to sew up the button holes a tiny bit if they ended up too small. See, tiny! Oh well.
Sewing them on is easy but boring. Only 5 of them actually keep the coat closed, so I focused on sewing those on really well and kind of phoned in the other five. haha. No one will ever know. In the end I only ended up replacing the double row of buttons on the jacket, not all the pocket, collar and shoulder ones, it was just too many white buttons. I think it was a success! I didn't even have to sew up the button holes more because of the smaller buttons.

I had TONS of people compliment me on my coat, and its is all really the buttons. FOOLED YOU.

Ever since working at that clothing store, I feel its my mission to rid the world of hideous plastic cheap-o buttons. I banish you.
Do it!
at 5:37 PM 6 comments:

Email ThisBlogThis!Share to TwitterShare to FacebookShare to Pinterest
Labels: project

Welcomed 2011 by drinking cheap pink bubbly at a small nerd party in my nerd apartment. 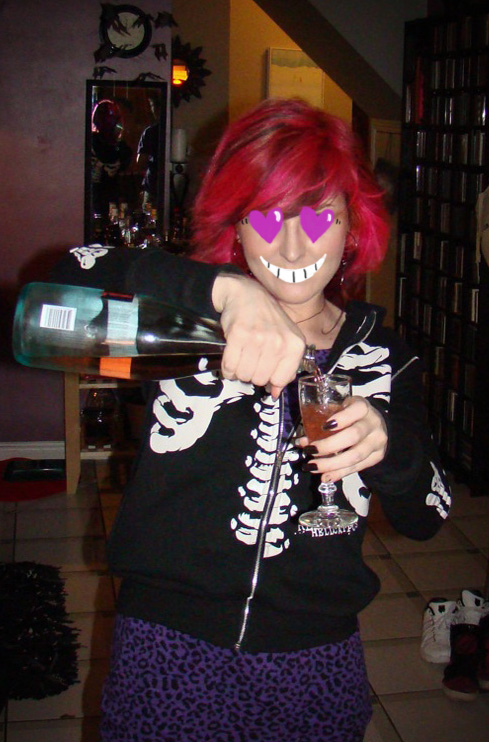 I don't have a hangover, so I am taking that as a good sign the year won't be a crapfest.
Cheers! 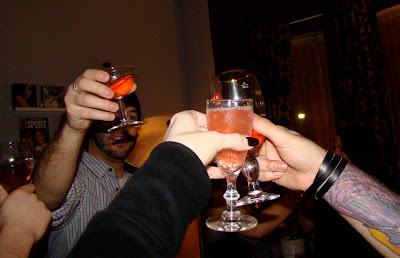