I rarely, rarely keep anything I make.

Other than original paintings, I basically sell everything I make. Or at least try to, har har.  So now that I have branched out into the world of print on demand it is SO SWEET because I can actually have some shit for myself! 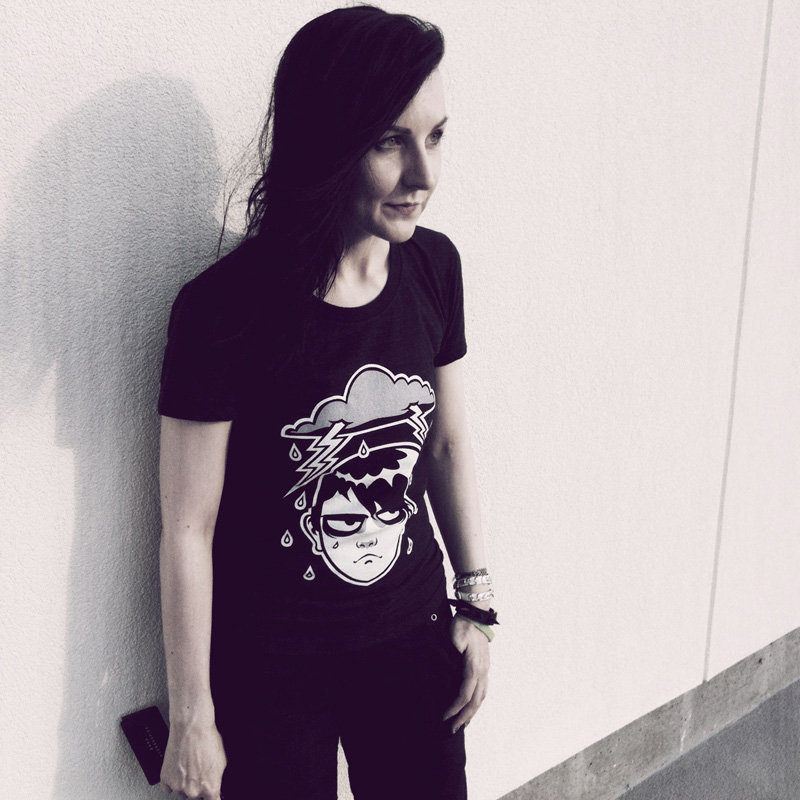 Yesss. Getting shirts (and bags) and other junk from Society6 or Redbubble or Spoonflower is AMAZING. 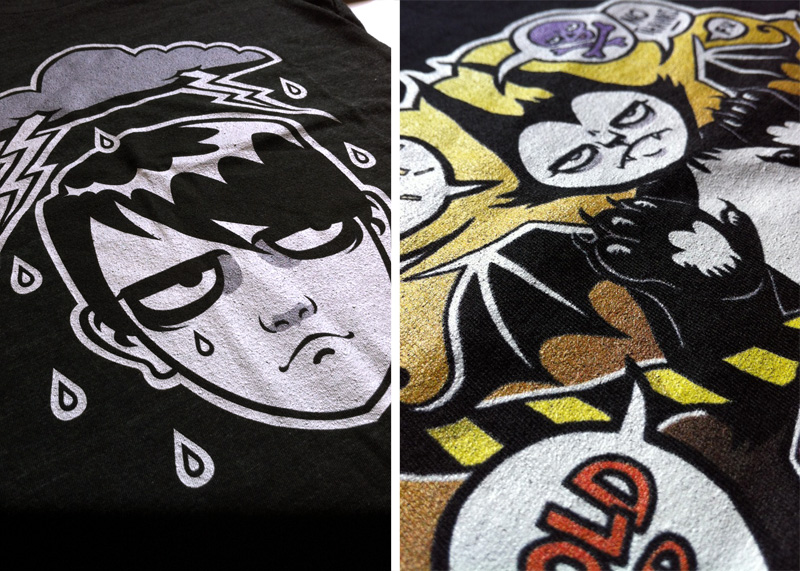 I got these two from Society6, and they are pretty great. The "Regular Day" grumpy dude is a tri-blend black, fitted women's tee by American Apparel, and the "Stay Back" Batcat is a regular black women's fitted tee. You can get them in a ton of colours, and in different styles of apparel too. I have always thought American Apparel's sizes were tiny, its wise to get a size up, or if you have boobs...don't have boobs. Also the tri-blend seemed to be a bit smaller than then regular black tee. Looks fancy though!

Society6 sometimes has free shipping worldwide too, so if you follow them on social media (or artists who use them, LIKE ME) its a great way to get cheaper goodies.

The colours came out pretty true. Its always a toss up when you get something printed, the colours never look the same onscreen and in person. 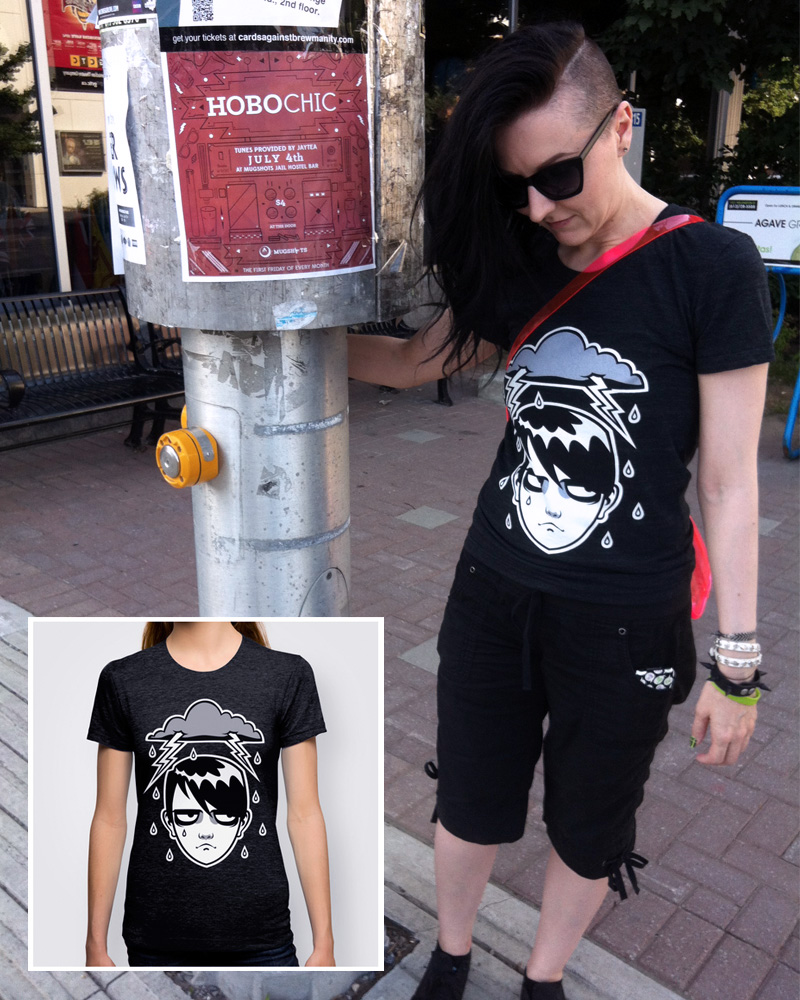 Here is one without the fancy Hipstamatic filters. Not too bad, maybe the design is a bit lower on the body, but pretty darn close. Tee held up to washing too, which is kinda a big deal.

I got a bag from S6 a while ago and it is super great. I was thrilled with it. 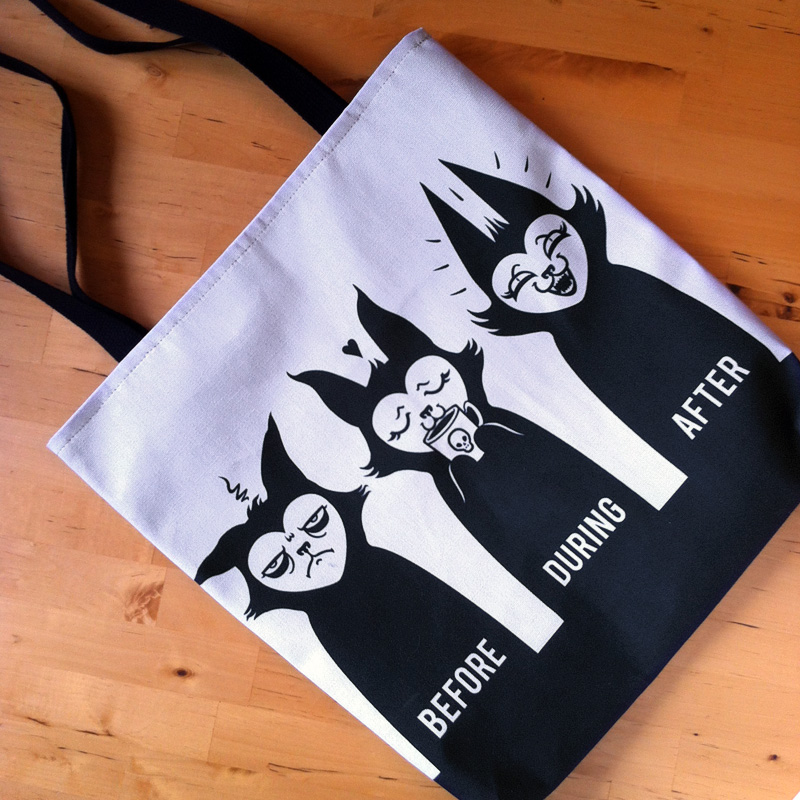 So far, I have only had good experiences with the stuff I test. I always check out pics that other people send me when they order my stuff. (WHICH I LOVE!) but there is nothing better than getting your mitts on the real thing and seeing how it holds up to harsh treatment. I am planning on slowly replacing all my wardrobe and household items with junk with batcat or grumpy boy faces on them. Slowly but surely...

I made a ton of fabric designs from my art a while ago, then promptly uploaded them all to Spoonflower and forgot about them....heheheh. Ok, I got my act together,  and ordered a set of swatches, and it just came in! 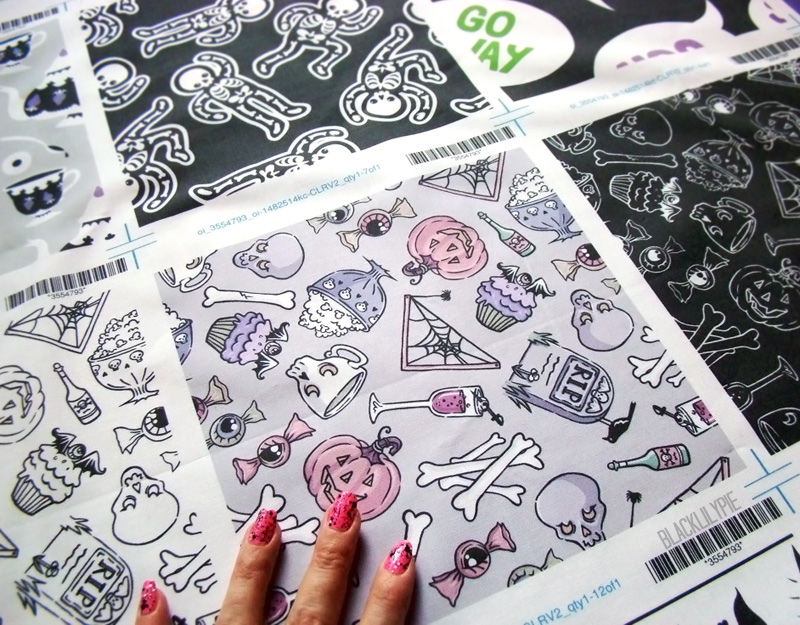 Spoonflower is a site that lets you design fabric, and then they print it for you. They have a ton of different options of fabric to choose from, plus they print wallpaper, gift wrap and those neat wall decals your mother-in-law buys. You can buy your own designs, or just buy from other designers. Its a community as well, lots of design inspiration. Lots of amazing stuff to be found. Here are the designs I have available right now... 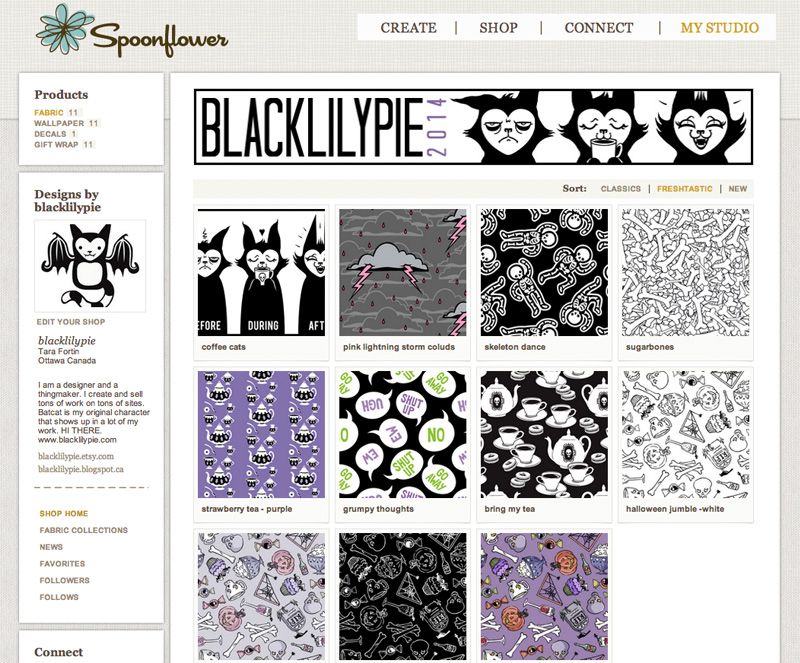 When you upload a design to spoonflower, before you can buy it (or sell it to others), you have to get a swatch. Which makes a lot of sense because a lot can go wrong with something like this. Its good to have a real life test print, to check out the colours as they are never quite the same on fabric as they are on screen. I mean, that goes for ALL printing. I test print everything.

So here are some images of the swatches. 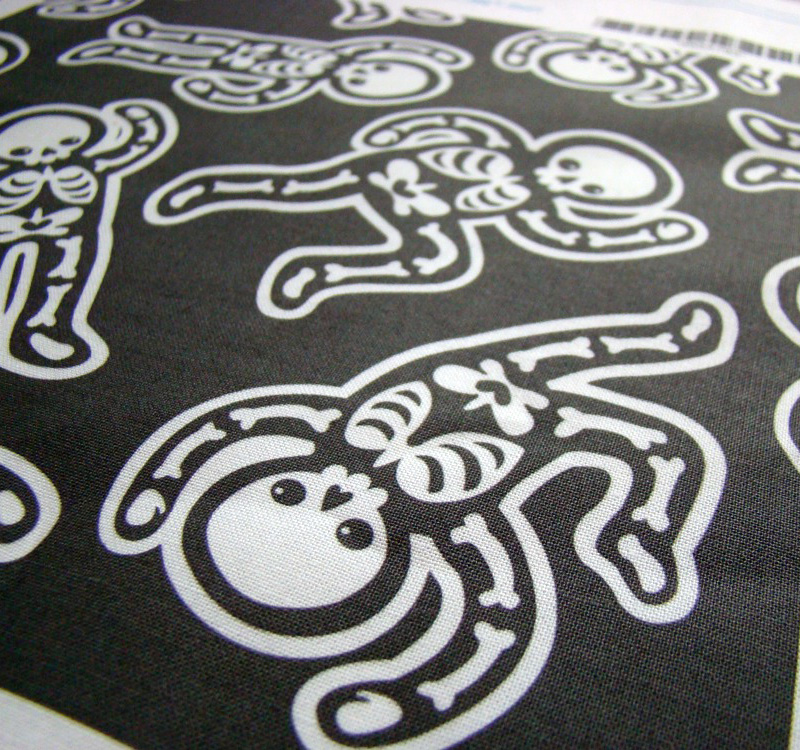 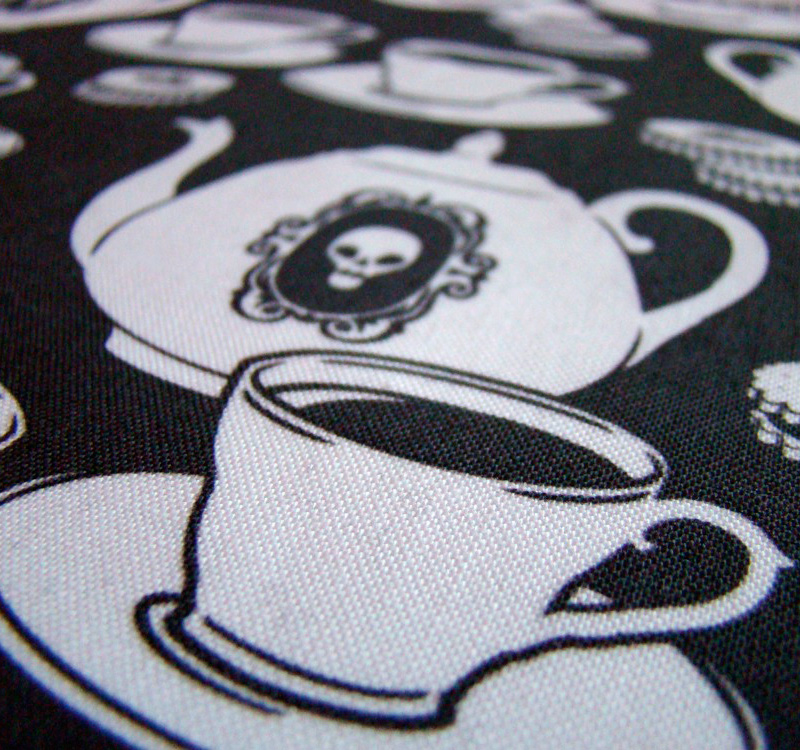 They came out great! The printing is super crisp! Tiny details are clear. The colour ones look awesome! I actually did a lot of black and white, but seeing the colour swatches, I might make more colour patterns in the future. 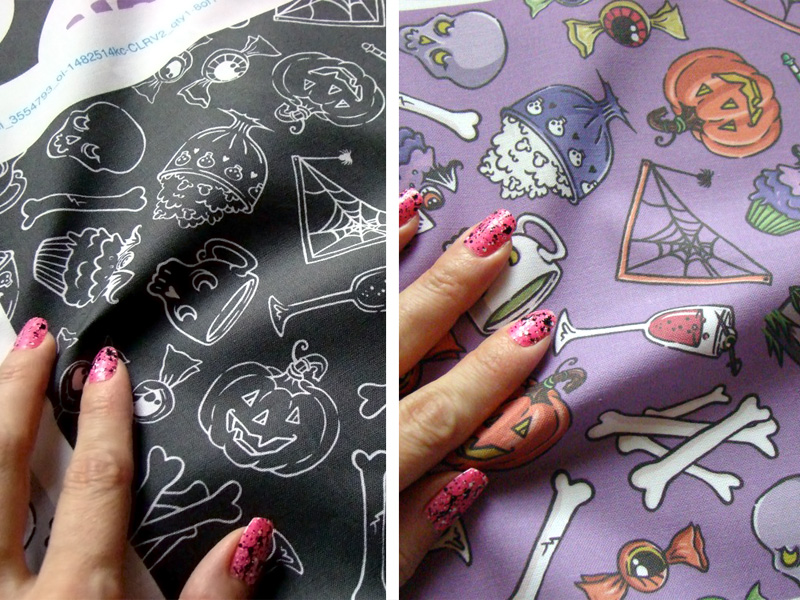 I chose a Kona cotton for my swatches, which is at the cheap and cheerful end of the fabric selection they print. I think this would be great for lining purses or pouches, quilting, or other projects that you don't want bulkiness. 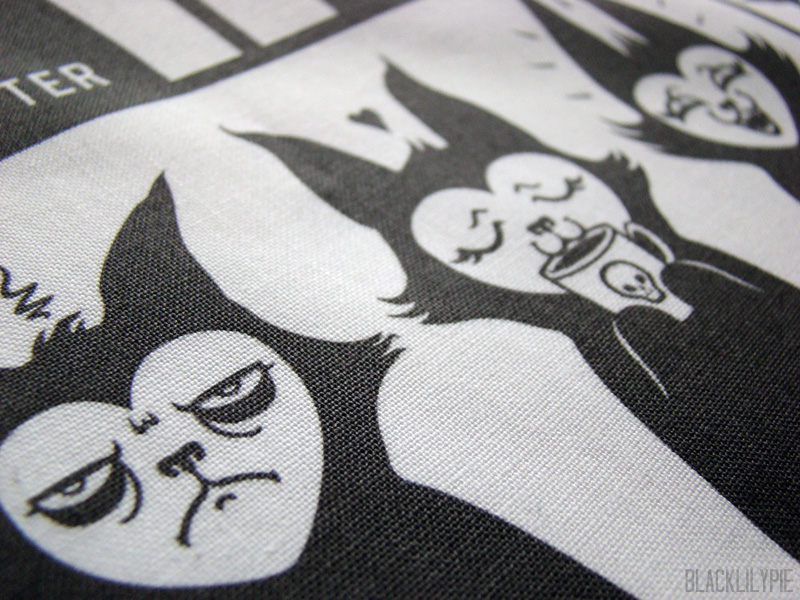 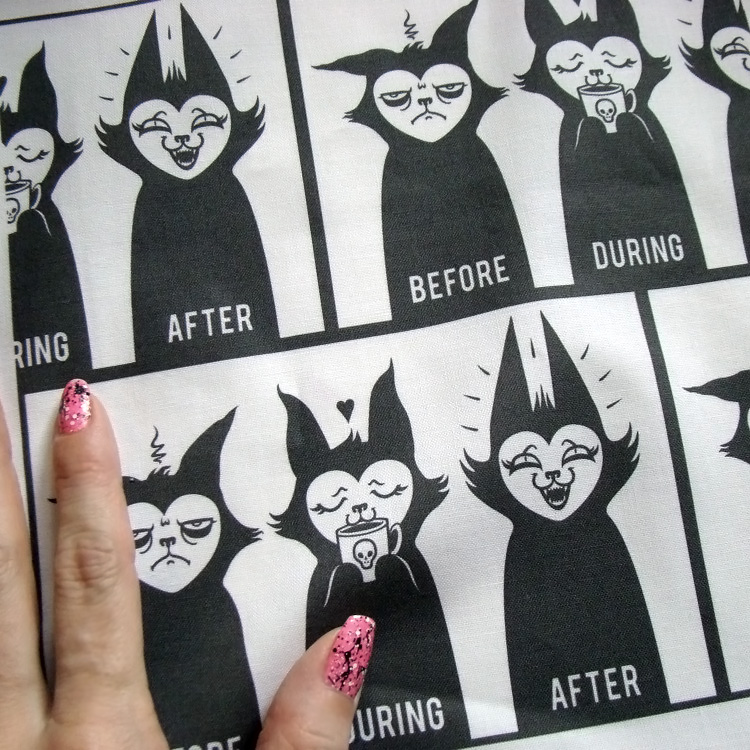 I am happy with my swatches, I will definitely be ordering some yards of fabric in a few of these designs. I didn't take photos of all of them, I swatched 15 designs, and a few didn't make the cut, not because of quality, but because I thought the design could use some work. My absolute favourite is THIS ONE.

Now I can get to it, making TONS AND TONS more patterns. I have plans to do a bunch of stuffed dolls and such with my fabric incorporated, and it is going to be super fun.

It was Canada Day weekend, and my parents came to visit.
And of course a bloody HEAT WAVE struck. Like, a terrible, horrible sweaty muggy heatwave, had the nerve to during their trip.

We went to to see the Doré exhibit at The National Gallery of Canada. Which was interesting, but mildly disappointing personally because I had confused him with another artist in my mind. Like getting chocolate when you wanted vanilla really. You can't ever really complain about seeing AMAZING art. In my opinion Doré's best work is this: 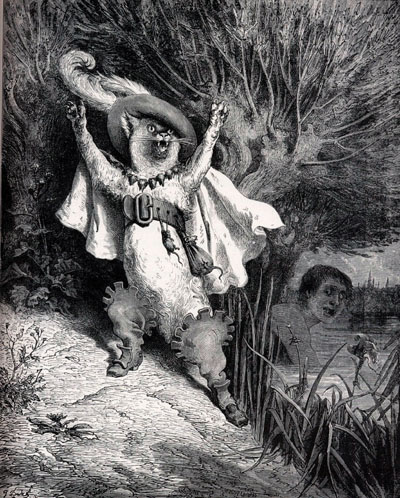 SO CUTE. Like the angels and demons are cool and all but awwwwww.

So mostly we spent the weekend eating, sweating then eating again. I don't get to see my parents very often, we mostly just wanted to hang out so we could compare what british shows we have watched. (My mom didn't like SHERLOCKKKKK! *internaly weeping and judging*) 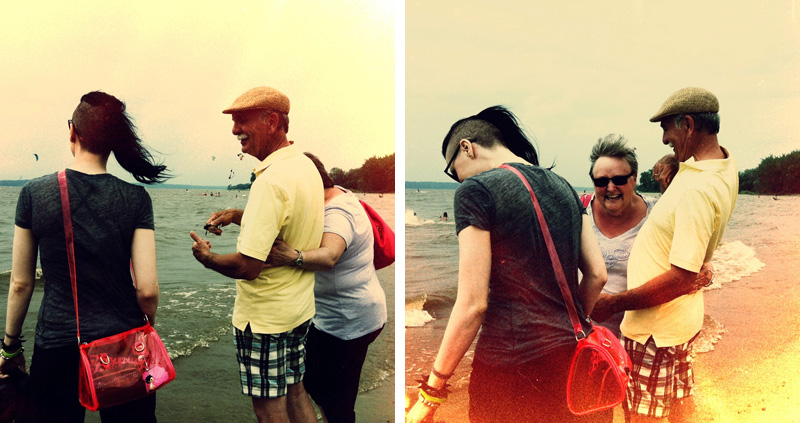 We did do some Canadian stuff. We touched beach, saw people doing extreme water sports things. 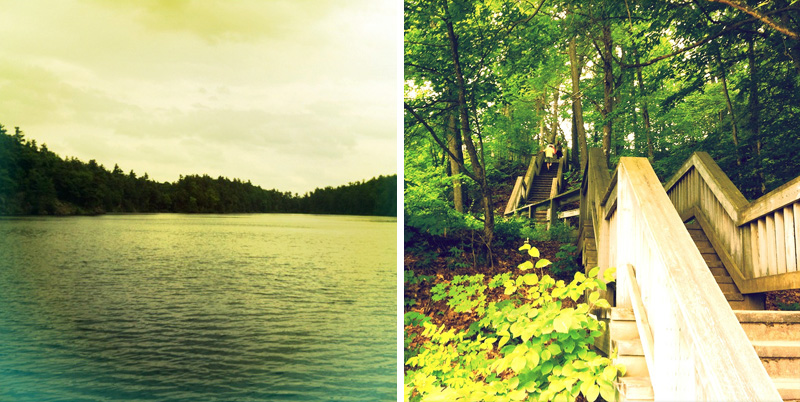 But maybe the best part was when it was too hot to do anything, we just got in the car and drove, and ended up on the top of Champlain Lookout in Gatineau Park, we got there as a storm was blowing past and it was crazy neat. 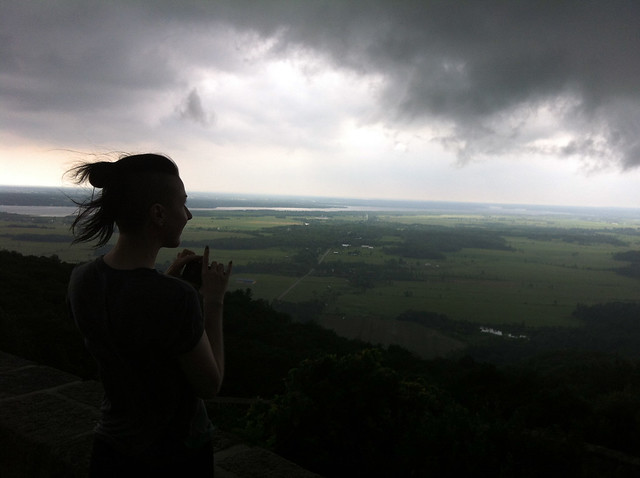 Seriously cool. There was a tornado somewhere in the area that wrecked a bunch of things, we found out later.

All the pics and driving were done by Nathan, who I told I would credit for his hard work because its not cool to steal content. haha. Plus he is better at taking pictures. All the ones I took of this amazing storm are pathetic.

My parents slept in my cramped studio with all my prettyboy Supernatural pin ups and half finished projects. They never, ever complain, and they always buy extra ice cream "JUST IN CASE." :-) Ugh so cute.