Wait. We can have earthquakes in TORONTO?? NO WAY.

Just had a little earthquake here, and sitting in my studio, which is in a hundred year old building (which may or may not have been built by unskilled townspeople) I felt the tremors. The building started creaking and the walls and ceilings were cracking. Sounds scary right? Not really because it always creaks and cracks and shakes when people walk on the stairs or sneeze really loudly.

I wonder if it shows a lack of appropriate action in a dangerous situation, because I didn't run to a door frame or whatever you are supposed to do, I complained then looked on Twitter. The cat didn't even wake up.


Anyway, I *was* working on listing a stuffed Skull and Crossbones! Its available at my Etsy Shop.
The bones are not attached and they can be arranged how you desire, or you can hit people with them.

I also listed a plush bow... It is also available at blacklilypie.etsy.com
Its a nice tapestry style fabric. Would look great in your boudoir!

I am already tired of people on TV and Twitter and Facebook talking about the earthquake. "I totally dropped my ice cream!" and "It felt, like, shaking, and...stuff." Already BORED of it. Even bored of my own anecdotes. I am such a grump! ha ha.

Hey. What is that? Those? I have no idea.
Ever make something you don't really know what its purpose is? Heh heh. Working on a few stuffed items this weekend, will probably put them in the shop next week.
at 1:21 PM 1 comment:

Look at my bike. Isn't it cute? My leg looks funny.
Its small enough that legally I could ride it on the sidewalk (its based on wheel diameter) And even though I usually don't ride on the sidewalk, it just necessary sometims when you live in a big city. I like knowing I am *in theory* allowed to do so. And this is me at a True Blood Party on Sunday. It might have been rude to park myself dead center to the screen, I realize now. But I was there first!

There was pickled eggs! Jealous? No me neither. (Sorry Tracy! I bet your eggs are the bestest eggs on earth, but they are still eggs. :-) ) You were there in egg-spirit.

So this weekend, I got to see ducks (cute!), had cake delivered to me in bed (hazelnut actually...), watch like 6 episodes of Rome (sad but awesome!), see bill and eric (Team Bill), drink sambucca (I want to wear it as perfume), and buy products from the drug store (My favorite store on earth.) The little things make the big things suck a bit less.

Email ThisBlogThis!Share to TwitterShare to FacebookShare to Pinterest
Labels: bike

A little painting is finished... This tiny little painting started out as a face doodle on a scrap of board...
It was inked with acrylic ink then painted in acrylic paint. I sealed it with glossy varnish. Her little face is cute, no?
I am waiting to put her into a little Ikea frame. A painting this small just seem like it should be sold as a complete package. I will just let the varnish cure a bit more and probably will list it on Wednesday...

(UPDATE!: Here she is in her frame!)
Think she would make a nice bookmark? print? hmm. Will have to do some test printing tonight too. Much to do, much to do...
at 4:38 PM 4 comments:

Email ThisBlogThis!Share to TwitterShare to FacebookShare to Pinterest
Labels: painting Unsurprisingly, he seems to be some sort of fox-like creature...
And then the painting... A Fox Soldier! He is dressed in his best uniform with his buttons all shined up.
and the I scanned it and printed it and matted it! This is a photo taken in my studio. I have not had the official listing picture photoshoot, as it is rainy and gray today. This little print needs natural light! I really love the print in real life. I had not planned to mat it in an oval, but the subject matter just seemed too perfect to not try and it worked.

I think I will mat the original and sell it too, it needed almost no Photoshop and is pretty much identical to the print.

(Update: I listed the print at Blackforestcake! Check him out...) A teeny, tiny bread machine!!
After much use and abuse of the old second hand bread machine I was gifted, it became clear that I needed a new machine. The old ones pan kept popping out and then it wouldn't let go of the loaves!
After scouring reviews, I decided on this little baby. The Zojirushi Home Bakery Mini Breadmaker. It IS little, only making 1 pound loaves. That is about 9 slices of bread per loaf. That is really small for bread machines. Its about half as big as my old one. See? Small little perfect loaves of bread. This one is a light rye.
I have made two loaves of bread so far, and its a dream. For two people its perfect to have such small loaves. Bread machine bread only has a short lifespan and we would always have mouldy leftover bread at the end of the week. It also has a handle on the top so you can move it around. I really struggled lifting the old machine, it was the size of a microwave! We had to drive to the super faraway Pacific mall to buy it, but a trip to "The World's Largest Asian Mall" is hardly a hardship...
I am going to try to make pizza dough in it next. Like, right now. YAY!

(Update: I totally made it too. It was so fat and ugly! But tasted soo goood.) 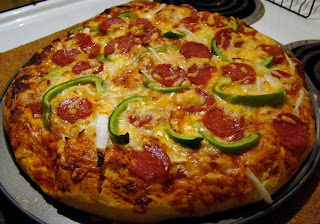