Two and a half hoodies

Oh no. I found a store that sells my favorite kind of weird imported Japanese clothes. FOR HALF PRICE. DANGER.

This hoodie will either call up extreme jealousy or extreme confusion to why someone would want to wear it. I think its so fancy... 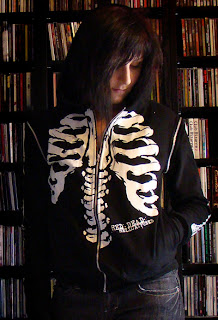 Yeah, it has skeleton arms that I failed to photograph. BUT WAIT! Its also has zip off arms and comes with TWO DIFFERENT ARMS! Mummy wrapped screenprinted arms. Like, what the heck?? Its awesome. 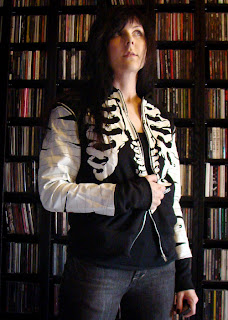 Its more of a little jacket, so I won't be able to wear if for a while, which kills me.

Plus, as if that wasn't enough hoodie for my week, I made myself one. (Ok, made it better.) 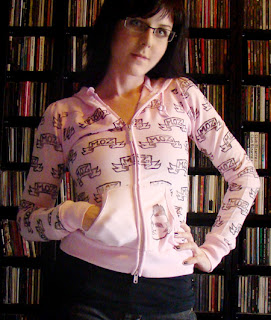 Moz hoodie! Its printed front, back and arms. It was my first printing on an actual garment, but it came out without too many flubs. the arms were the most trying, as I wanted it to be a continuing pattern all around. Think Moz will like it? I am sure he would approve of my DIY-ness.

Tomorrow I am back to the Japanese clothes store for the "new stuff" they were unpacking and insisted I needed to see, buying clothes/scarves/whatever to stamp on and trying to scrub purple hair dye out of the countertops/floor walls.
at 9:42 PM