Another little custom order, a portrait of a much loved and "right up my alley" sort of wild and naughty little boy cat named Danzig. (How could I turn it down, a boy super-loving his cat and naming it Danzig is like a freaking fairytale to me!)

It was fun and fast and I took a few photos of... 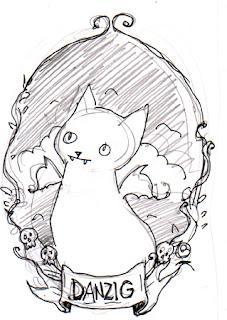 This was the original design sketch. I had some photos of the little dude for reference, so it was more working out what would be around him. I did another separate one for the actual cat, and then spliced them together for the final sketch. 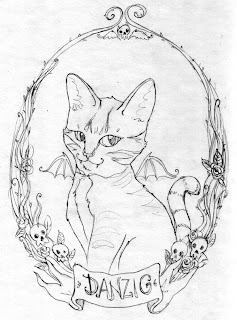 This is the scanned pencil drawing on illustration board. Thats why its a bit muddy, I had to up the contrast. 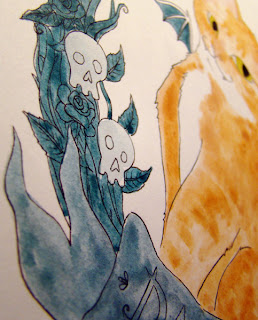 On to the painting! I guess you aren't supposed to give away your secrets to painting, but its not like I even paint the same way each time so there isn't really any secret. I tried to keep this one from getting too tight, and colouring it in like a colouring book, but it just happens like that at the beginning. I use really watery acrylic and blast it with a hairdryer every five seconds. And I listen to HIM. 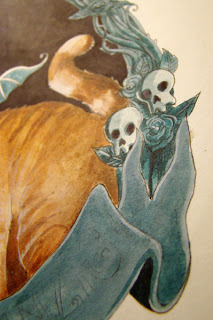 I think I should have taken another one in between this and the last one.I basically just added dark and light a few times...dark then light then darker than lighter until its high contrast enough for me. 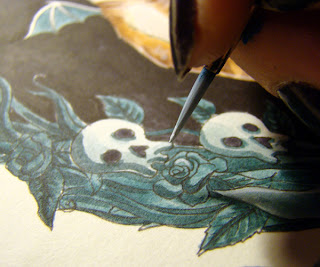 Like this. With a paintbrush! Secret REVEALED! Ok, here is the final guy... 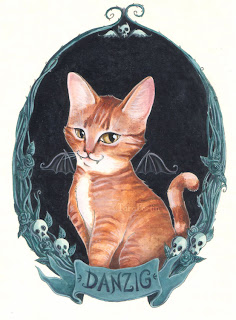 Danzig! I think its pretty cute. He is a sort of bad boy, but with a heart of gold, like all orange cats are. :-) 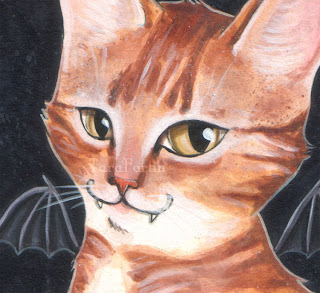 Whatever bad thing he did, you'll forgive him.
at 1:49 PM