Screw Twilight. I don't have the review ready that I promised. I spent the weekend buying gifts and eating my hopelessly burned peanut butter cookies instead. I also messed with my blog layout and tried to not headbutt the screen while messing with codes in seemingly random fashion. So this is what it looks like now.

Then I started a new little project... 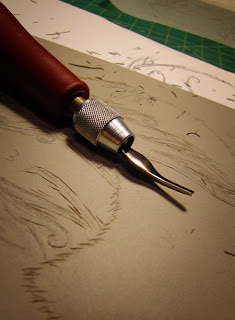 I am starting a little lino carving!

I don't know how to carve linoleum, but that rarely stops me from doing things. I did some lino prints when I was a kid I think. And then one or two in highschool (or was it university?) Whatever, I touched lino block some time in my past.

I usually use softoleum (or soft-kut) for my stamps and fabric prints, which is way softer and easier to use. But its hard to get small detail. I wanted to try something new. And lino seems so much more grown up for some reason.

I also have the dullest lino cutter ever made by human hands. Its so crappy. They never have the size of blades I like at the art supply store. Why do they hate me?

So I have been warming the lino block under my bum (Hey, warming it helps you carve it!) and then carving teeny lines, which will be the guide for the deeper lines. I should be finished the carving by the year 2010.
at 11:00 PM