Often, when I am not feeling super creative, or maybe even frustrated, I will go into production mode.

Its nice to just not have to think of anything fantastic, or interesting or creative and just "do work." I needed to replenish my pin set supply, so I got on it. Its a good rainy day project anyway. 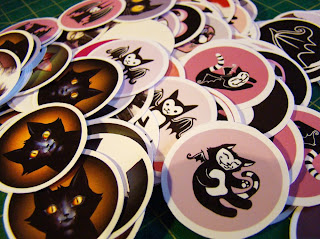 First, I print out all the pins I need. I make sheets of pins in Photoshop. Then its time to cut and cut and cut them out... Maybe a couple of hundred?

When the images are ready, its time to assemble the pins. Each little pin takes 5 separate pieces. 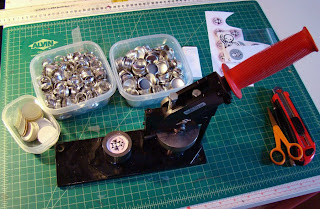 Here is my little set up. Ok, its my set up before it got super messy. Ok, Ok, its before I started doing ANYTHING. The button press has a handle you pull in twice to set different parts of the button. Its the kind of mindless task you can do while watching tv. After making thousands of pins, you just robotically put the pieces into the press and before you know it you are finished. 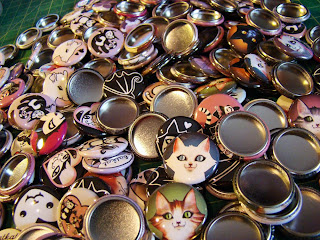 And here is a TON of buttons waiting for their pin backs. I love when I have a big huge pile of buttons, its like when people in movies throw money in the air and clutch it in joy. I just get button joy. I promise I don't clutch or throw them. Much. 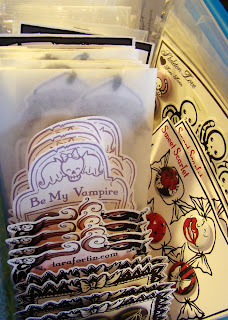 And then they all get their respective backing cards, which I didn't think I needed a photo of. It would be a picture of a printer anyway. I just print sheets of them and carefully cut them out.

It doesn't seem like inventory much when its in a box, but there are tons of sets in there. I also make little bags of completed pins and print more backing cards as I need them.

So now I am restocked with pin sets, and yesterday I restocked my ACEO's. Maybe I will do a photo post about ACEO assembly too! Ok, now I am just LOOKING for busy work... :-)
at 11:32 AM