Yeah, its my birthday.
I received my little gift from my dude, which was wrapped in a super deceiving way. Little fatty iPod. aww.
He gave me a little gift bag with junk food in it. The iPod was hidden in a litte chip bag which he had sealed really well so it looked unopened. Until I picked it up I didn't even know. I was like "chips???" haw haw.

So this little guy replaces my *much* loved last pink iPod, which still works but after years of constant recharging, is loosing its will to live. 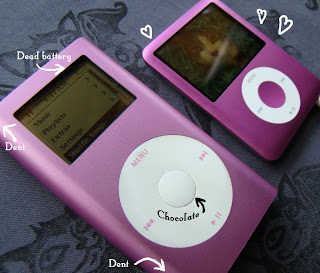 The old one lived though a lot. It deserves props.
-being dropped on the concrete floor of the stockroom I used to work in (three times at least) I would sneak it in. Whahaha! Big dents on corners, but works like a charm.
-chocolate smushed into the click wheel by a dude who will remain nameless at a birthday party.
-stepped on once, made a mark on screen that remains black all the time. Poor little fella.

It seems I am hard on my things, but in reality, this little iPod just lives near the door and at the bottom of a purse and has a rough life. I think its actually really amazing it can withstand it all.

But the new one rocks my freaking socks. I loaded it up with 1500 songs and videos of drunk people at parties and rocko meowing, and pics of my family and junk and stuff. 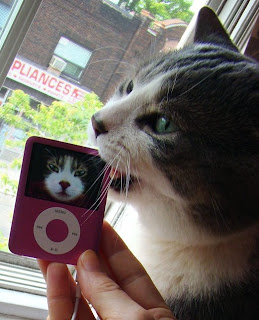 Rocko also approves. OF THE TASTE.

Oh yeah, and it matches my hair. 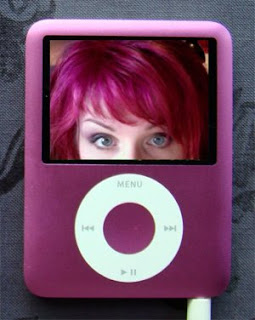