I feel a bit bad about trashing Twilight. Maybe if I had thought the dude from the movie was cuter I could have been won over to the dark side (or the Mormon side, or whatever...) Ok, the feeling passed, its still lame.

My lino printing is also kinda lame. Its not a disaster by any means, but its not as perfect as I envisioned it. I made a LOT of prints and most of them are too "quirky" for me to be happy with. The ones that are good are good. I want to try some different inks before listing anything. I also want a printing press now. There is one at the art supply store I go to all the time. Its only like $500. :-(

Here is a new product I just listed. Stickers! 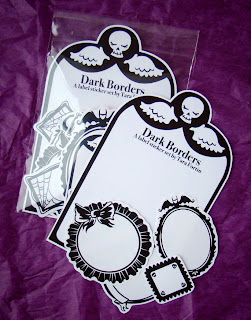 I am a label person. I just like them. Plus its useful, cheap and cheerful. (ok, maybe not quite cheerful, but they could be if I wasn't such a freaking closet GAWTH.)

I think a lot of stickers will be in my future. I have approximately one billion ideas for sets to draw. Most of them include gravestones. Ha! Next up is a Batcat set. I have the sketches complete, now I just have to draw them in Illustrator.

So its Cyber Monday (in the states). Today. Yep.
*crickets*
Pretty much what I expected. I hate being told when people are supposed to shop. Who says Cyber anyway? Welcome to the 90's. *Runs off to watch Hackers.*
at 11:56 AM