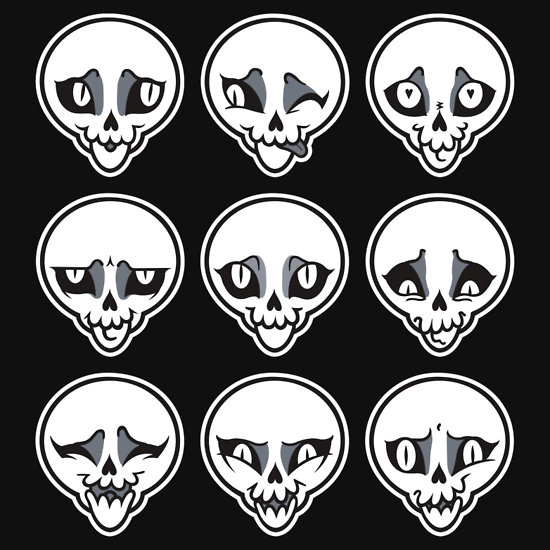 
Sometimes it takes a while to get to where you want to be. This design had some screw ups, which I worked on, and I think it came out good in the end.

Here is an example of the final products I made with this design. 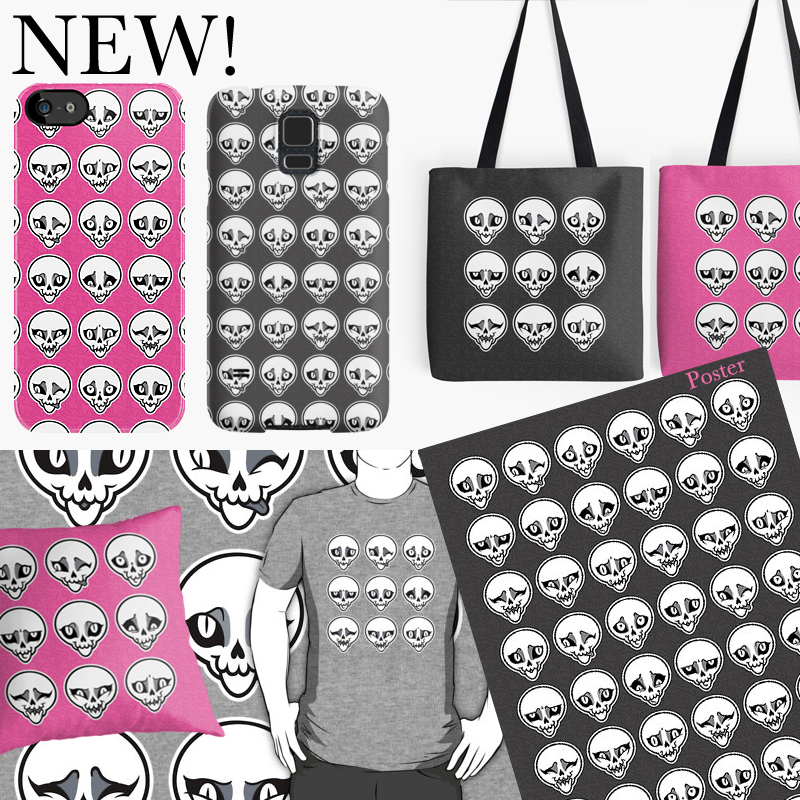 See it all turned out ok.  The background of these items (except for t-shirts) have a faint bones pattern that you can see up close. These things are available at my Redbubble shop. You can see bigger and clearer images of A TON of items I put this design on.
The GREY VERSIONS are here. And the PINK VERSIONS are here.

Ok, so lets get to the screw ups parts of this post. (Under the cut) 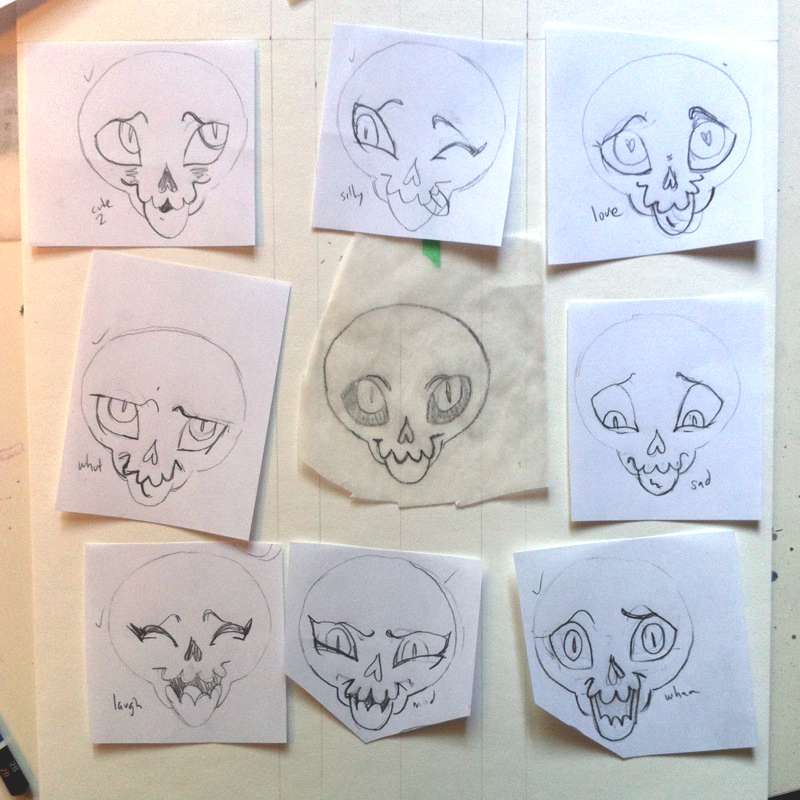 Ok so I drew my little faces, you can see the original one is actually the face from my skeleton silkscreen guy. I just liked his face and wanted to do more.

I transferred them to illustration board, and started painting. I don't know why I decided to do a really dark background with tons of crackle and spatter and stuff... But it was the worst. 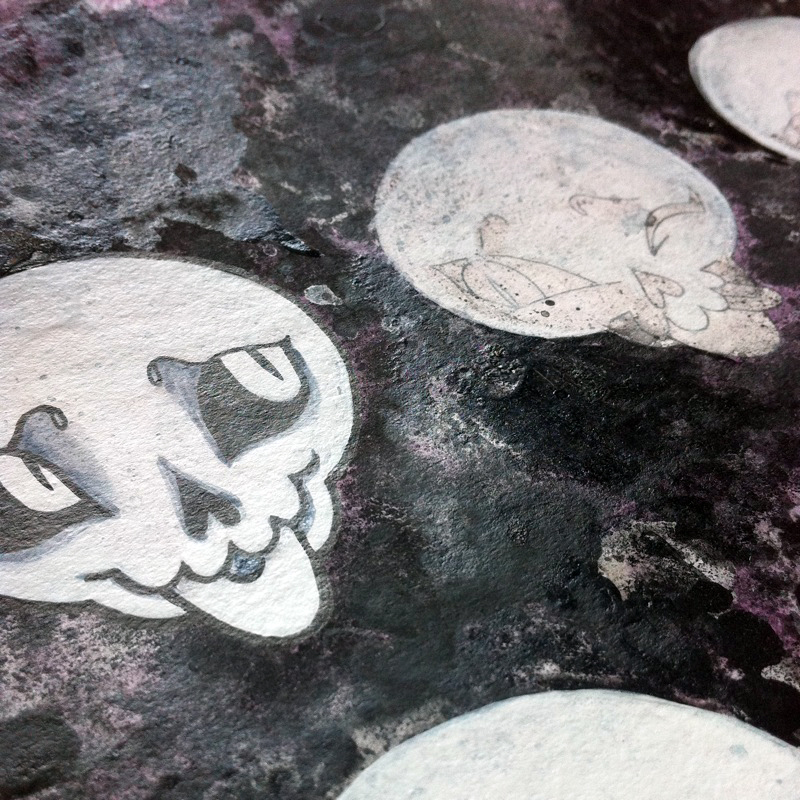 Like, it pains me to even put this single photo of this screw up into the world. Ok, so realizing that this painting is complete crap, I retrace my faces... 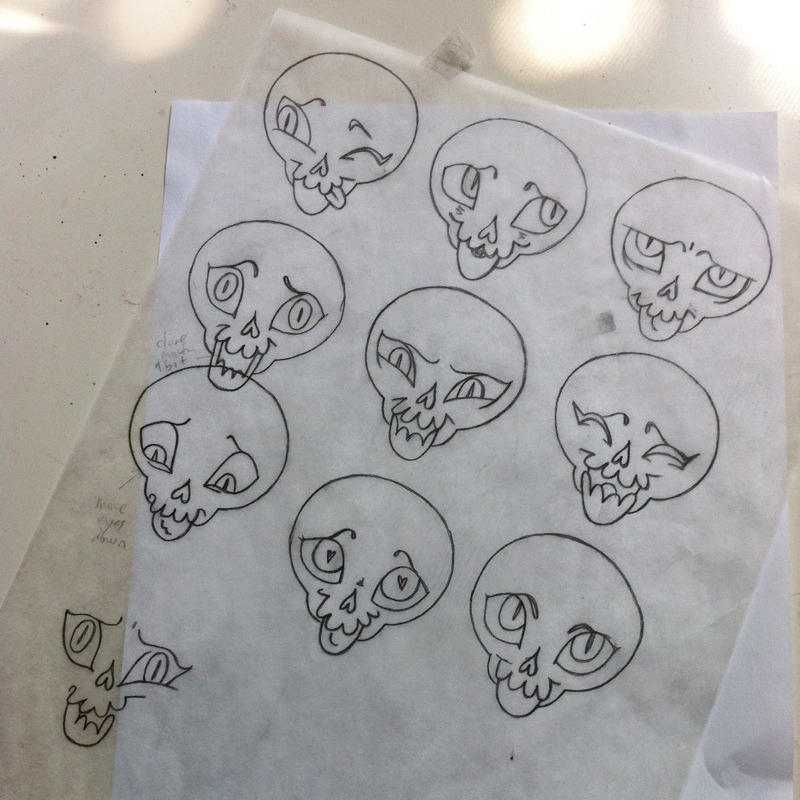 And start again, this time doing the EXACT opposite and painting super clean. 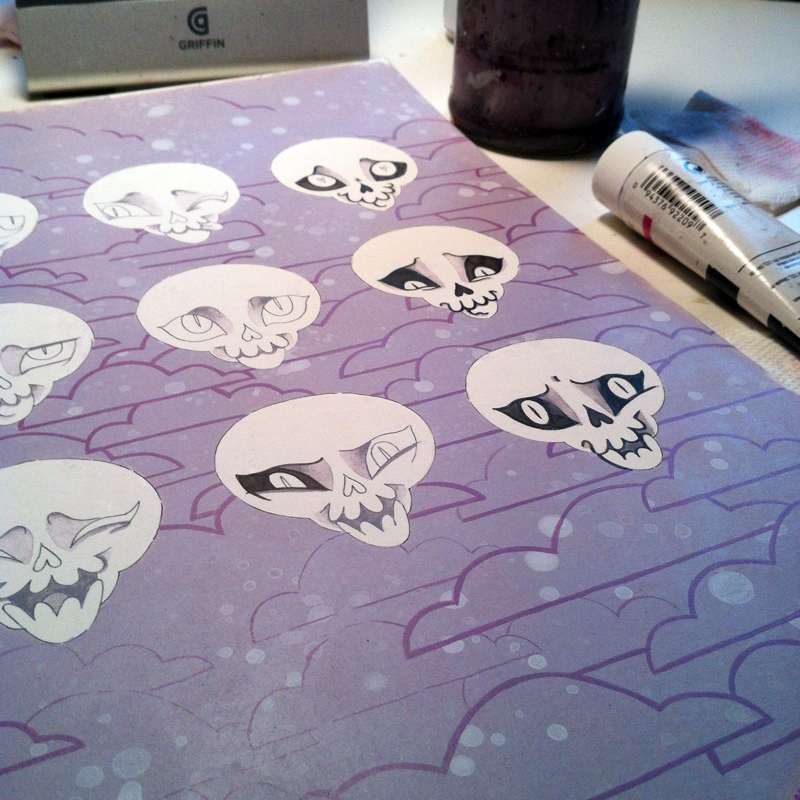 I just put some Netflix comedies on and painting all calm for a freaking long time. Like, Netflix was worried about my health. 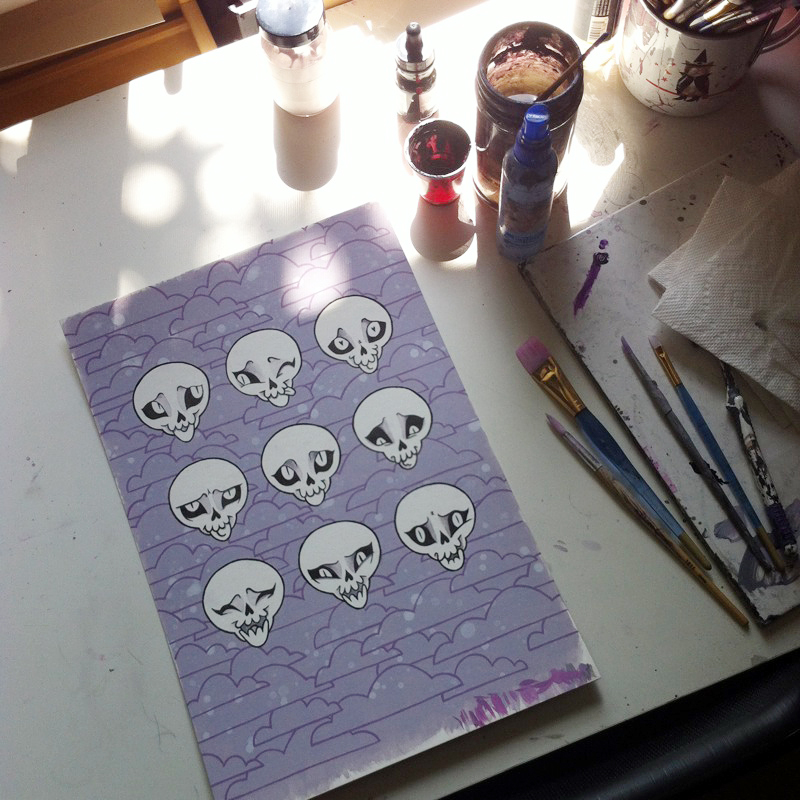 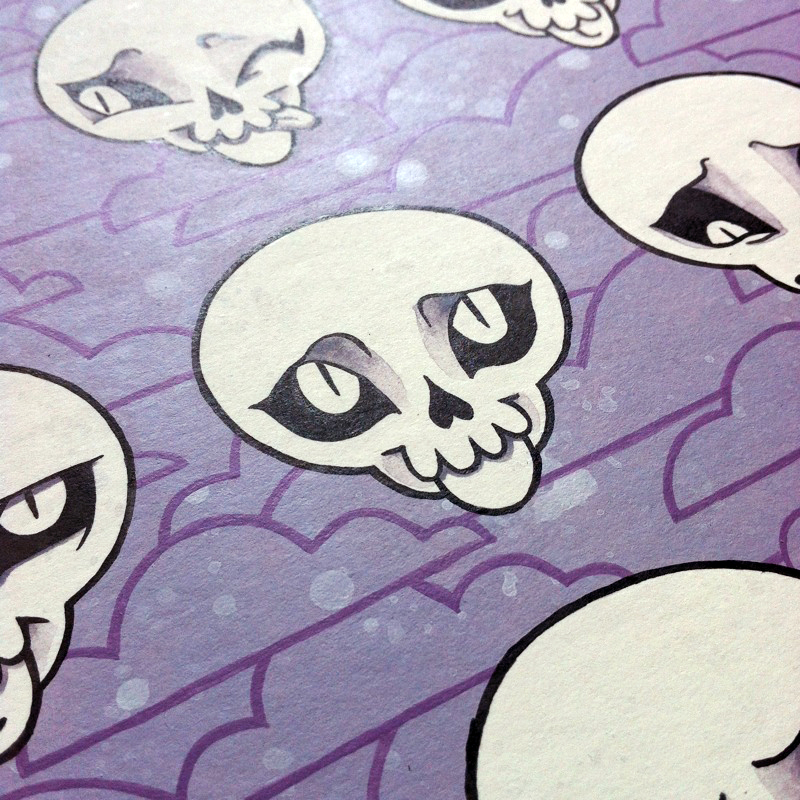 Ok. Its done.....Um. I don't like it at all. I mean, its clean and perfect and stuff, but a big meh to me. I think it would be nice framed as an original painting, because it is crazy flawless, but not really feeling it for products and stuff like I hoped.

So I scanned it and "placed" a crumby low-res jpeg of it in Adobe Illustrator and built vectors of all the faces using the original as a guide. 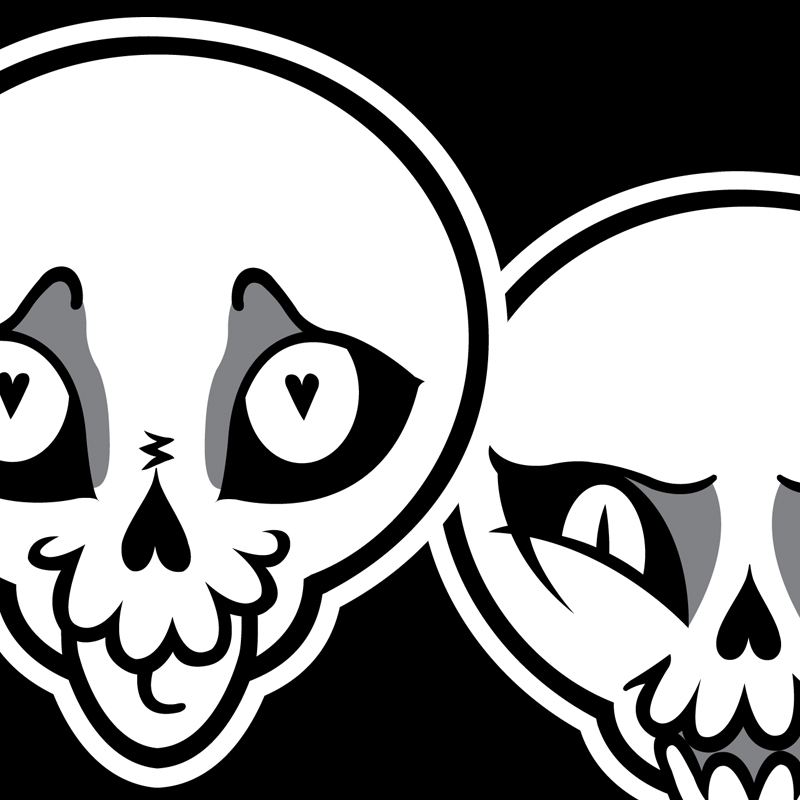 OMG SO MUCH BETTERRRR. The small tweaks and nudges you can do with a digital design made all the difference with something this simple. Each face got a bit more refining and I think that all my screw ups helped me get to this point. Maybe some people would be like "Huh? It looks the same." No, it really doesn't. The painting version looks like a slightly bad knockoff of this digital one.

Sometimes you just have to scrap stuff or salvage stuff and redo it. Some projects are perfect from start to finish, but seriously, that isn't really all that common with me. A lot of projects get too annoying after you screw up once or twice. I have a bad habit of ditching them in a corner. Maybe this post will remind me a bit to stick it out. 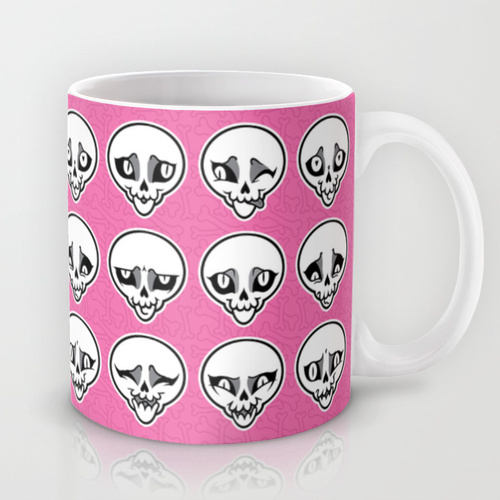